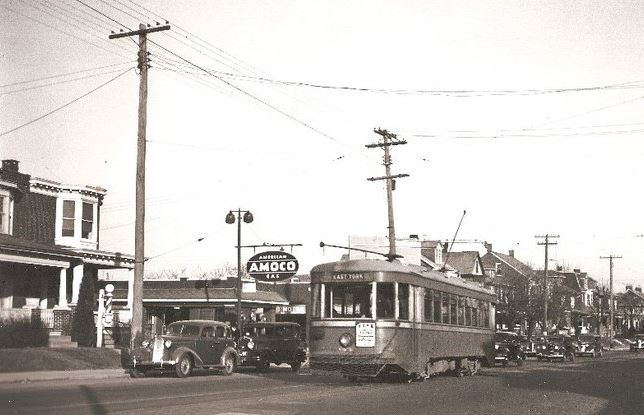 According to the 1928 listing of Lincoln Highway concrete markers, Post 87 was installed at the northeast corner of Clinton and West Market Streets in West York Borough. This marker would have directed travelers heading west to stay straight ahead to continue their journey to Adams County and Gettysburg. As noted in a related post by Stephen H. Smith, York County Boy Scout troop 13, installed this marker here on September 1, 1928 while other markers where installed by other boy scout troops.  Across the street on the northwest corner stands a historic service station that is ready for preservation and reuse today. 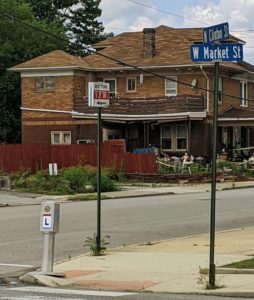 This early Amoco service station was built circa 1940 and is currently available for sale. In it’s most recent incarnation, the building hosted the gourmet coffee shop, Latte Da. This early photo from the business Facebook page shows the trolley heading past the business when it pumped gasoline for passing motorists. The Lincoln Highway carried a steady stream of motorists who could pull in at almost every major intersection across York County. The building today could easily host another coffee or ice cream shop that could serve this West York neighborhood. We need to preserve this piece of our Lincoln Highway history. 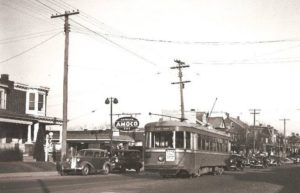 Amoco was the gasoline brand of the American Oil Company. This 1920 advertisement from the York Dispatch shows that Amoco was available for purchase in the area. The American Oil Company was founded in Baltimore in 1920 but by 1925 was taken over by the Standard Oil Company.  Besides Amoco, the Atlantic Refining Company in Philadelphia and the Gulf Refining Company in Pittsburgh were the primary competitors for business. The National Independent Oil Company headquartered in York also tried to carve out a marker for gasoline and motor oil in the area.

This 1928 concrete marker is no longer standing at its original location, but it remains as one of the few remaining concrete posts standing in the county. A few block to the east along West Market Street, the marker was moved to the front lawn of the Reliance Fire Company. It reminds us of the time when West Market Street carried the nation’s first memorial to President Abraham Lincoln and this historic road from New York City to San Francisco to our doorstep. 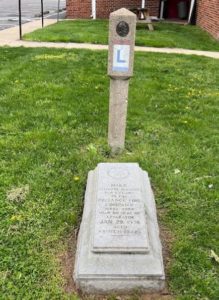