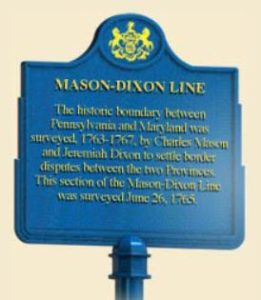 Recently, I had the pleasure of meeting with Richard Resh in his home in West Manchester Township. He is a retired senior project engineer with C.S. Davidson, Inc. and brings his civil engineering expertise to researching early places and transportation networks. His recent work led to the publication of  his book, “Where Was Werking’s Tavern?”, that was prepared for  The Heritage Committee of West Manheim Township, York County, Pennsylvania. He reminded me that the first public toll road in York County wasn’t the turnpikes running east that became the route for the Lincoln Highway in 1913, but the Baltimore Hanover Pike that was officially established in 1736 on the Maryland side to establish a road along an existing Native American path from the port city of Baltimore Town to the then Conewago Settlement into the Commonwealth. Maryland made their stretch a private toll road in 1805. Pennsylvania followed by improving the road by officially establishing a private toll road here in 1807 from Hanover to the Pennsylvania border to the south. In Resh’s book he states that the “[turnpike] was built by Edward McCabe and was completed on November 15, 1809.” (Where was Werking’s Tavern?, Pg. 6.) Keep in mind that the Mason Dixon Line survey east of the Allegheny Mountains wasn’t completed until 1765 so the Baltimore Hanover Pike truly was the main transportation route into the frontier at that time.

For me, the most remarkable part of his research is that with help from C.S. Davidson they recreated the 1809 survey that laid out this historic road in the search for Werking’s Tavern. This was an important stage coach stop for weary travelers between the Hanover area and the port city of Baltimore during Colonial times. To recreate this historic route you have to consider that over the centuries that the original road would have been straightened and widened multiple times and the original footprint of the road had changed significantly over the years. The research also documents the locations the existing original four stone mile markers on the Pennsylvania side of the route. Remarkable, that they still are standing in their original locations after over 200 years.  West of York, the Monacacy Path which became the Philadelphia Great Wagon Road would have taken a turn south to meet up with this Baltimore Hanover Pike. On the Maryland side, the road was known as Conewago Road, the Pack Horse Road or the Wheelbarrow Road. Today, MD route 30 roughly follows the original route and PA route 94 north of the state line into Hanover. The road is also known as Baltimore Pike if your heading south to Maryland or the Hanover Pike if you are driving north to Pennsylvania. Whatever you call it, this is certainly one of the most historic transportation routes in all of York County, Pennsylvania.

We also discussed the potential for bringing more people via automobile today along these historic transportation routes throughout the county. From the Baltimore Hanover Pike during Colonial days to the Lincoln Highway automobile era of the early 20th century. Maryland has made their road part of their Mason Dixon Scenic Byway. See the map below for how this byway touches our southern York County communities. The Scenic Highway is a federal program that identifies historic transportation routes that are documented to bring attention and heritage tourism to these long forgotten roads. Could the Lincoln Highway and early roads like the Monocacy Trail and this Baltimore Hanover Pike receive similar federal scenic byway designation? It would create an opportunity to further connect the historic communities of York and Hanover in a way that is ignored today. From National American migrations, to pioneer wagon roads to the first coast to coast Main Street, the Lincoln Highway. This topic certainly deserves further discussion with federal, state and local elected officials and community leaders.

If you are interested in obtaining a copy of Richard Resh’s book, please contact us at info@lincolnhighwaypa.com for more information.