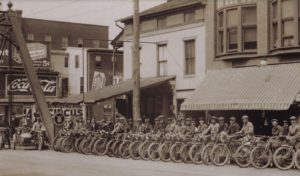 The discovery of this early 1915 photograph of H.O. Young’s Harley-Davidson motorcycle shop brings attention to the history of early motorcycle businesses and dealers in York City. Before Harley-Davidson came to town, York residents already had an opportunity to buy Indian, Reading Standard, Yale and even Excelsior motorcycles. Turns out this wasn’t even the first location for Young’s Harley Davidson dealership in York. In 1912, Harry Osborne Young, a German immigrant, was advertised as an agent for Harley-Davidson while continuing to sell cigars in his store at 7 West Philadelphia Street. By the end of the year, Young had moved his new dealership to 13 West Philadelphia Street to exclusively offer the 1913 Harley-Davidson models with “Full-Floteing seat and free wheel control.” Within a few months, he then partnered with Gunner Frey to open the Penn Motor Cycle Garage at 12 North Penn Street. Young’s motorcycle sales and repair shop was growing by leaps and bounds as the market for bicycles and motorcycles increased as an affordable alternative to early automobiles.

By October 1914, Young was ready to expand again and opened his new store “at the bridge” on 223 West Market Street along the Codorus Creek. This photo from the spring of 1915 likely shows a gathering of the local Harley-Davidson motorcycle club who came together for social and long distance rides or races and hill climbs throughout the area. York was booming in this age of early manufacturing and Young’s local Harley-Davidson dealership flourished at this location. As World War I came on the horizon, nationally motorcycle sales slumped and the marketing shifted to promote their economic benefits over their recreational value. This 1918 advertisement from The York Dispatch states their motorcycles will “transport two people for less than [a quarter] the cost of railroad fare”, but the advertisement also promotes the annual Harley-Davidson “National Motorcycle Gypsey Tours” later that summer.  The use of motorcycles continued to evolve with the introduction of side cars and even package delivery “trucks” over the next decade.

As the roaring twenties kicked in, Young’s Harley Davidson dealership continued to grow. In March 1923, he announced the opening of his newest location at 143 South George Street, which is now a parking lot next to York City Hall. The new building was advertised as “the finest and largest exclusive Motorcycle and Bicycle Salesroom and Repair Shop in the east.” We need to locate a photograph of this historic building that  that has been gone for many years.  He sold Harley-Davidson newest models here until October 1927 until Harry Young sold the business and dealership to Michael Jesse Pugliese from New York City. Pugliese continued to lease the building under the name of York Cycle and Toy Shop with early advertisements promoting the store as the “headquarters for juvenile vehicles.” As the Great Depression hit, Pugliese moved the York Cycle Company first to 330 South George Street and in 1934 to 334 West Market Street to find an affordable location for his business. Further research is needed to determine when the York Cycle Company closed and whether there was a gap between Harley-Davidson dealerships in the area through World War II.

By 1948, John O. Rahn opened a Harley-Davidson motorcycle dealership and service center around the corner from the Lincoln Highway at 604 West Mason Avenue. In 1950, Veron DeGrange took over operations at the same location. A few years later in 1955, Laugerman’s Harley-Davidson Sales took over the dealership here as well as already operating another store on Elm Avenue in Hanover since 1949. Lloyd P. Laugerman went on to become Vice President of the Middle Atlantic States Motorcycle Dealers Association and to many in the community the Laugerman family history and Harley-Davidson motorcycles are intertwined more closely than the earlier Harry Young. Today, Harley-Davidson motorcycles are still manufactured along U.S. 30 and sold at the 1st Capital Harley-Davidson just to the west along Arsenal Road.. But, we must not forget that Harley Davidson’s earliest history in York stood along the original route of the Lincoln Highway, America’s first coast-to-coast Main Street when the dealerships were located twice along West Market Street.

Harry Young didn’t rest on the laurels or profits of selling his Harley-Davidson dealership in 1927. He next built Young’s Boat House offering Sunday dinners, private parties and concerts in Long Level along the Susquehanna River. Still, the family maintained their residence on Maple Avenue in York City where he lived with his wife, Ella A. Thompson Young.  In those days, the Long Level community was frequently damaged by annual ice jams and flooding but Young’s Boat House remained in business for decades. Harry Young died in 1968 at the age of 94 and is buried at Prospect Hill Cemetery. We can now envision him riding off into the sunset on his first Harley-Davidson motorcycle headed for hog riding heaven.