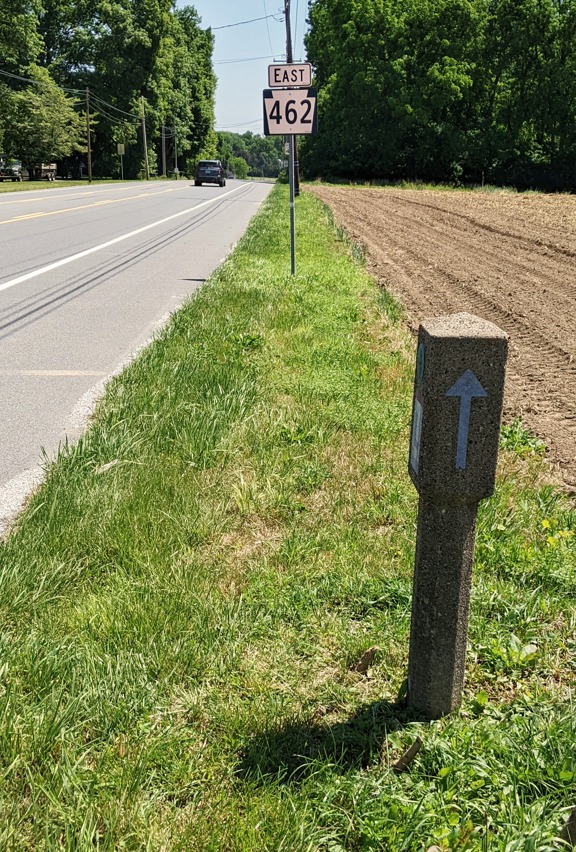 When the original route of the Lincoln Highway was established in 1913, there were no maps or road signs to guide motorists. Initially, the road was marked with red, white and blue painted signs on utility poles but there was no consistent marking of the road. “Any motorist would prefer to follow a thoroughly marked route where he is at all times sure at all times of his direction and correction of his course….” While the Lincoln Highway Association (LHA) published turn by turn guide books, it was the markings seen through the windshield that helped  the wary traveler confirm that they were on the correct route and headed towards the next town. By June 1916, the LHA partnered with the Patton Sun-Proof Paint Company, the Wooster Brush Company and drove two cars donated by the Willys-Overland Company to paint uniform markers from Jersey City, New Jersey to the Nebraska-Wyoming state line. After only a few years it was obvious that these painted emblems were not durable enough to provide permanent marking of the highway.

By 1921, the LHA received sufficient donations to erect steel porcelain signs with the Lincoln Highway insignia to be placed  along the highway on eight feet redwood posts. The Autocar Motor Company of Ardmore, PA donated two trucks and crew for installation of the signs between Trenton, New Jersey and Omaha, Nebraska. Auto clubs in California agreed to mark the remaining miles to San Francisco. A total of 2,700 signs were erected over the 1,353 miles from coast to coast. Unfortunately, in less than three years more than 1,500 posts and 2,100 signs needed to be replaced. The colorful markings had fallen victim to either vehicle accidents or easy rifle targets along the highway. With the Lincoln Highway maintenance and improvements being taken over by the states and federal governments, the LHA needed a more permanent way to mark the first national memorial to President Abraham Lincoln. 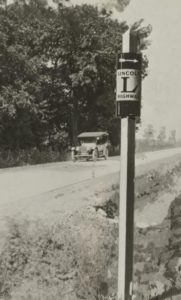 The LHA turned to the construction material that was used to build better roads, CONCRETE, to create more permanent markers. The Portland Cement Association developed pigments that wouldn’t fade when mixed with a concrete Lincoln Highway emblem. A bronze medallion with “This Highway Dedicated to Abraham Lincoln” was attached to the top of every marker. Standing four feet high above the ground, each of the 3,000 monuments weighed 300 pounds and would be a permanent legacy to our sixteenth President. The markers were manufactured in Detroit, Michigan near the LHA headquarters and arrangements were made with instructions to ship the markers to local LHA consuls across the nation. In York County, the local consul was F.H. Wogan, proprietor of the Pennsylvania Garage. This newspaper advertisement in the Tuesday, June 23, 1925 edition of The York Dispatch shows that this was formerly the Hotel Penn Garage. The marker instructions from the LHA confirmed that placing of the 1928 concrete markers would be the final action of the association since their work to create a coast to coast improved road was finished. 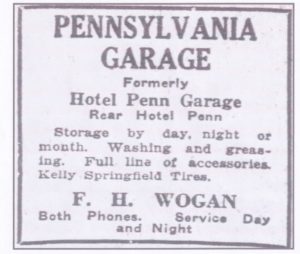 The LHA partnered with the Boy Scouts to installed as many of the 3,000 markers as possible. Two markers were to be placed at significant crossroads, one at minor crossings, and other markers were placed at sufficient intervals so that motorists knew they were still on the Lincoln Highway. The markers were placed on the outer edge of the then narrow right of way to avoid interference with state highway signs. Unfortunately, as the Lincoln Highway was widened over the years many of the original concrete markers were hauled away to landfills by road construction companies and state or local road crews that didn’t recognize their historical significance. Today, only three 1928 markers remain along the Lincoln Highway across York County. Only one maker, near Ducktown Road across the highway from the Kreutz Creek Library in Hellam Township remains at its original location.

The LHA and the Boy Scouts of America first sponsored a National Lincoln Highway Safety Tour to promote the installation and identify the locations for the markers. Ray F. Zaner, York Scouts Executive, as reported in the York Daily Record, met with the national Lincoln Highway Safety Tour  on Saturday, July 7, 1928. As recently researched by Stephen H. Smith in YorksPast, Uncovering Stories of Lincoln Highway Markers, twenty-seven local troops from the area installed all 26 posts on Saturday, September 1, 1928. Additional metal porcelain signs, similar to the earlier 1921 signs but attached to metal posts were also installed at a few locations in Wrightsville and York City where the concrete posts could not be installed due to space limitation along the road. 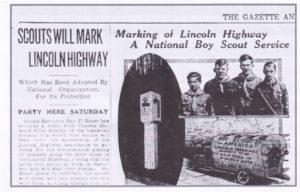 We will be exploring the transportation history of these original locations of the 1928 concrete markers in the coming months. We will also invite local and state officials and local historians to join us at these  locations to have their photo taken with a replica of the 1928 concrete marker to celebrate our Lincoln Highway history. Finally, we are inviting the community to make donations to help us erect new Lincoln Highway signs across York County to again mark this historic route. We have the permit from PennDOT and we will be sharing details on this exciting development.

More information on the history of Lincoln Highway marker development is available in The Lincoln Highway, The Story of a Crusade That Made Transportation History, Dodd, Mead & Company, New York, 1935.