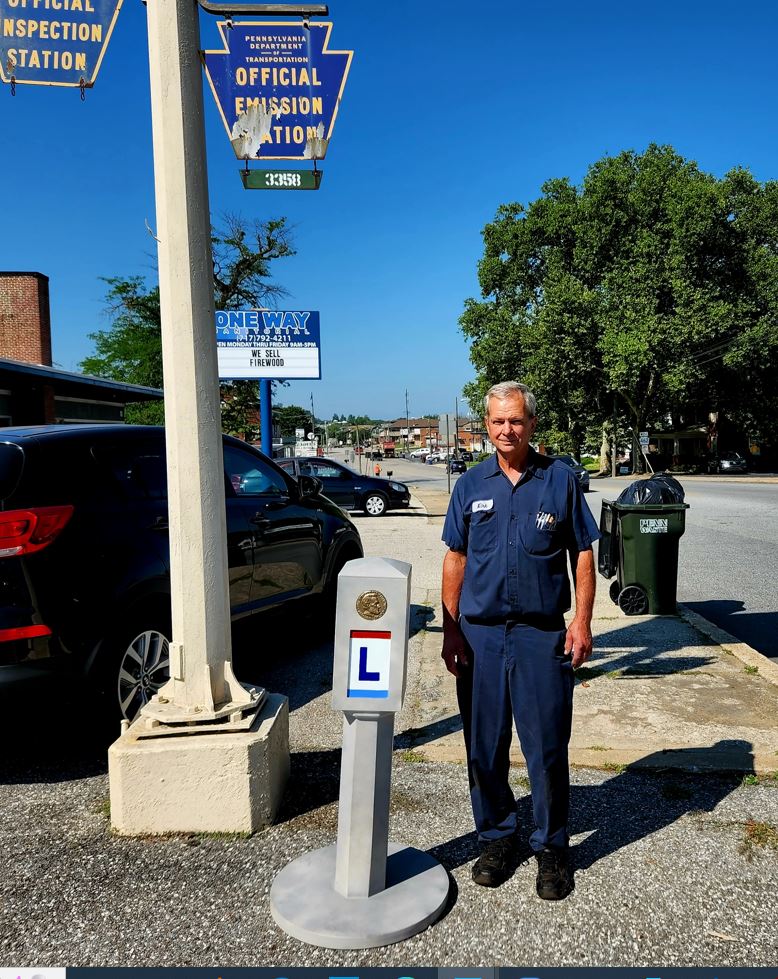 The 1928 Lincoln Highway list of original concrete marker locations for York County records marker #88 as a double straight arrow post that was opposite 2403 West Market Street in West Manchester Township.  The arrow markings show motorist to stay straight ahead as they travel between York and Gettysburg. The settlement and development of West York Borough and West Manchester Township began almost 200 years before the route of the Lincoln Highway was established for automobiles and trucks in 1913. As Stephen H. Smith explained in his earlier blog post, Boy Scout Troop 42 installed the marker at this location. Does anyone have any pictures of the installation of the marker here?

This 1770 edition of W. Scull’s Map of Pennsylvania shows this location as being part of the network of early wagon roads that took settlers to the western frontier. The blue oval here highlights the location of interest relating to the 1928 Lincoln Highway marker. 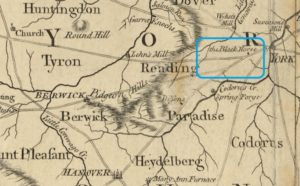 Just west of the Black Horse Tavern the northern road would be today’s East Berlin Road (PA 234), the middle road would later become the York Gettysburg Turnpike (US 30/PA 462) and the southern road would take pioneers to Hanover and points south. An interesting aside is that there is a state historic marker for a Black Horse Tavern in Continental Square in York City. It would be interesting to know whether the Black Horse on this 1770 map is a different tavern or simply mislabeled on this early map. Here is a view from Google Maps of the intersection today heading west along West Market Street in West Manchester Township. 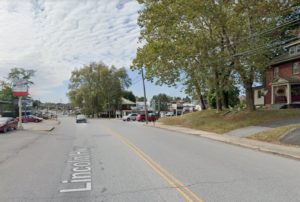 More research is needed to capture the history of the house currently located at 2403 West Market Street. Mr. Emory Schaeffer, an assistant cashier with York National Bank, who resided here with his wife was a victim on a hit and run accident in later December 1921. The account states that the Schaeffers were walking home along the Lincoln Highway from the nearest trolley stop after 11 pm returning from an event in York. At that time, the stop closest to their home would have been at the West York Borough and West Manchester Township boundary near 1809 West Market Street. There also would not have been sidewalks along this stretch of the Lincoln Highway so walking at night along the road without street lights would have been extremely dangerous. Thankfully, Mr. Schaeffer recovered from his injuries nearby at the West York Sanitarium. (York Daily Record, December 27, 1922, page 1)

Across the street today we find the original marker location near Trone Service Station. A West Manchester History Facebook entry on July 19, 2018 outlines the history of this family business. In 1928, the original Sunoco service station was built by “Ray Trone and his father-in-law, George Kling.” This circa 1950 image from the York County History Center library and archives shows that they were still selling Sunoco products twenty years later. This photo does not show the 1928 marker and Kirk Trone does not remember his parents mentioning the marker previously so it may have been accidently broken or moved prior to 1950 from this location. Today, he owns and operates Trone’s Service Station and carries on his family mechanical traditions along the Lincoln Highway. 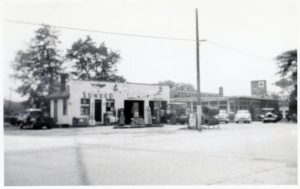 This post is also debuting a wooden replica 1928 concrete marker that is on loan from Bentton Webber from Lancaster County. In the coming weeks, we hope to feature this replica marker with community leaders and business owners all along the Lincoln Highway. If you would like to be featured in a future post with the replica marker please contact Lincoln Highway Legacy via info@lincolnhighwaypa.com.