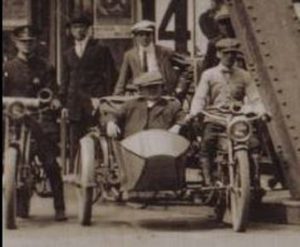 Tucked into the far left hand corner of this early 1915 Harley Davidson dealership promotional photograph, proudly sits a policeman on his motorcycle. The location is on the eastern edge of Codorus Creek on the iron bridge that took motorists along West Market Street along the Lincoln Highway until it was damaged heavily by flooding in the early 1930’s.  Today, the York County History Center Colonial Courthouse replica stands on the same property that once held a variety of merchants and store fronts throughout the early 20th century. As the automobile and truck delivery increased along the Lincoln Highway cities were the epicenter of the debate of how best to manage traffic issues. The Commonwealth of Pennsylvania first tried to address traffic issues through the “Automobile Law” in 1909 to provide consistent guidelines for all motorists but it wasn’t sufficient to deal with all situations.

As motor vehicles  joined street cars and horse drawn delivery wagons along York City’s business thoroughfares city officials understood the importance of paving roads to carry these heavier and larger machines. Unfortunately, the better surfaces also led to these more powerful horseless carriages frequently exceeding the established speed limit of 12 mph within the city.  To navigate the crowded city street filled with pedestrians, street cars and increasingly automobile and truck delivery traffic, they determined that a motorcycle policeman was their best to return safe travel for all. While many cities, like Baltimore and Buffalo, initially attempted to deal with traffic offenses through a carrot approach through friendly reminders offered through local auto club representatives, York City chose to go the stick approach and crack down on traffic offenders that were taking over city streets.

Newspaper accounts show that in the Spring of 1911, the first motorcycle policeman was Carson Linebaugh who lived at 127 Stevens Avenue in the city. The city purchased a 1912 model Harley Davidson from the dealer, Harry O. Young, and was issued motorcycle license number 2718 in 1911. At that time, his shop was location on 13 West Philadelphia Street since this location “at the bridge” wasn’t opened until late 1914. Almost immediately, Officer Linebaugh made the news for the wrong reason when a pedestrian, Mr. R.A. Rohrbach, stepped out in front of him at the intersection of Penn and Market Streets. Officer Linebaugh was reported to have been “coasting” behind a street car when the collision occurred. Thankfully, Mr. Rohrbach recovered from his injuries and the officer soon back patrolling the streets. Through the next years, Officer Linebaugh performed his duties including corralling and returning a runaway horse from the Spring Garden hotel. Officer Linebaugh still may not be the motorcycle patrolman in this photograph, since York City hired a second officer, Frank Augustus Free. His career with the York City Police appears to have been longer since he later rose to the rank of sergeant. Can anyone help us identify this motorcycle patrolman for certain from this image?

Over the years, Harry Young sold Harley Davidson motorcycles to local businesses including models used for store deliveries with the side cars as in the picture or later models known as “package trucks.” This Harley Davidson motorcycle ad published in The York Dispatch on Wednesday, June 16, 1926, shows that the York City police department still had motorcycle patrolmen on the streets and that Harry Young was still making money selling motorcycles. By this time Young had relocated to a more spacious state of the art showroom and service station at 143 South George Street. Then by 1927, Mr. Young sold his Harley Davidson dealership which moved to various locations throughout the city. Perhaps Mr. Young is the gentleman standing behind the officer in this photograph. Most will recognize 143 South George Street address as part of the site that later became a city government building. As the saying goes, “You can’t fight City Hall.” Drive safe wherever you are traveling along the Lincoln Highway.